Once upon a time in a land called Spotswood, there lived a small band of boys who wanted to escape to faraway places. Some were heroes and some were villains but all were creatively powerful. The young lads were named Peter, Chris, Bob and Jake. Led by a Dungeon Master, they met every week to map out their adventures and roll the dice for their fate.

The group ducked out of the doldrums of tedious tasks from school and created a magical world beyond anyone’s dreams. It was wondrous place of exploration and discovery where the only limitation was the boundaries of their imaginations.

A small square of land inside the boundaries of the brook and the streets of Bruning, Maiden and Manalapan became mystical whenever the boys met to embark on their adventures by waging war against the monsters.

Each boy became a rich and clever character with varying abilities and they often worked together to strategize, solve problems and overcome challenges. Other times they plotted and schemed and sought more control and power.

Some were Human and some were Elves. Others were Dwarfs or Wizards.

No matter what class they were, they assembled face to face around the table to slay monsters like Dragons, Giants, Orcs and Demogorgons.

In my last article “Friends Don’t Lie and other Stranger Things”, I highlighted how the elements of Freedom and Adventure were more prevalent for kids growing up in 1980s and were fostered by the very popular role-playing game Dungeons and Dragons (D&D). The lack of electronic distractions combined with the creative power of the face-to face interactions with a dedicated group of ongoing characters propelled a generation of geeks and nerds into one of the most innovative and explosive periods of American prosperity, the 1990s.

One of the things that fascinated me most about the Netflix series, Stranger Things, was the central and influential role the D&D-like game played. The plot, time frame and characters were perfectly set and most Generation Xers will proudly tell you that the story line would not have worked as well in another other decade.

When I was a young girl, my heroes were Wonder Woman and Samantha Stephens from Bewitched. Science fiction and fantasy were my favorite books thanks to my 6th grade teacher, Mr. Muschla. So as you might imagine, I love the idea of average, ordinary people possessing special powers that enables them to kick ass and defeat the stronger villains and monsters.

Role-playing games like D&D are so popular because they so strongly tap into that primal urge to be secure and defeat any threat to one’s safety. It is all the more fun and appealing when you add in a sprinkle of magical powers that help you slay an evil foe with a bit of fire and flair! Merlin and Harry Potter showed us this.

Although I wasn’t an elf or a witch or even a fairy, I had a carefree and adventurous childhood growing up in Spotswood, NJ. Everyone in the neighborhood knew each other by name and we all played together in the streets and explored in the woods and by the outlets, rivers and lakes.

I grew up on a small street called Maiden Lane and soon branched out with friends on Bruning Lane and Manalapan Road. After junior high school my world expanded to include friends from faraway places like East Brunswick, Milltown and Old Bridge (they were really only a few miles away).

The close-knit friendships we forged in the 1980s were organic and lasting. The creative minds and sense of unlimited potential propelled us on an exciting journies to battle strange enemies and malevolent beings. Little did I know it would send me to the Persian Gulf in 1990 to fight in a war against Saddam Hussein but that is a story for another blog!

During school, my circle of friends was diverse and interesting included a quirky group of kids. They were mostly marching band members who were smart and dare I say slightly dorky. I had the fun and privilege to watch some of them play D&D for hours on end and was fascinated by the creativity and power of the character development. The concept of underdog heroes having powers to stop villains appeals to me and perhaps some of this influence is what planted the seed for me to join the US Army in the late 80s.

I recently had the pleasure of reconnecting with some childhood friends from Spotswood to get their perspectives on Stranger Things and specially the influence of D&D.   Luck would have it that I was Facebook friends Peter C. (Spotswood SHS class of 82) and he has been a Dungeon Master for the past eight years and played with the boys on my block in the early 80s. Jack Pot! What fun we had talking about Stranger Things and strolling down memory lane, if not Maiden Lane.

Pete explained that D&D puts you into the adventure and makes you a hero. It sparks your imagination and for him and his friends it made their comic books come alive.

As a Stranger Things fan, Pete felt that “the D&D connection in the show allows the kids to relate to the weird events having around them. They have readied themselves for these battles. D&D has taught them to be heroes and they are putting it use fighting the Demongorgon in the Upside Down. Mind Flayer and Truesight are also out of D&D and are referenced in Season 2. 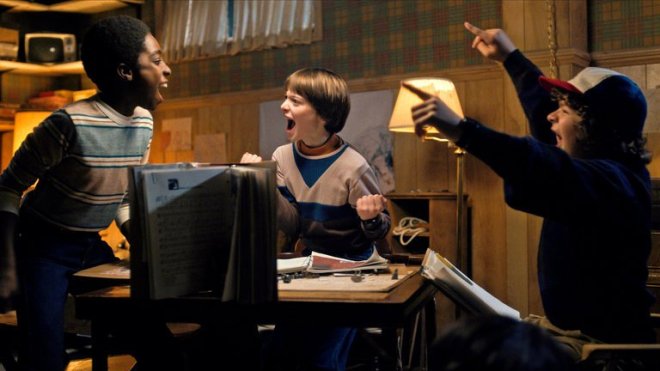 The New Yorker magazine recently published an article by Neima Jahromi titled “The Uncanny Resurrection of Dungeons and Dragons” (Oct. 24, 2017) and it summarized well some of the key ideas I had percolating in my mind after binge-watching Stranger Things Season 2.

The themes of escaping and being “off the grid”, connecting with a close and trusted circle of friends and fighting a common enemy are alluring and powerful in any decade.   The creativity that is unleashed by unplugging and sitting face to face around a table for hours is amazing and satisfying for many people. The level of immersion, concentration and focus that results from this type of experience is also something that is lacking our in hyper distracted and multi-tasking world.

This is why! This is the reason why Stranger Things resonated so strongly with me and millions of others.

People long to escape and share their stories and experiences. Role-playing games like D&D bring people together and gives the group sense of camaderie and belonging. 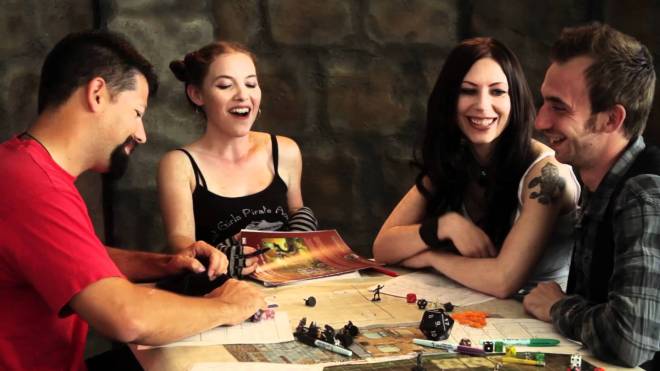 Like the band of boys from the land of Spotswood, you can enter a magical world that is an exciting place of exploration and discovery where the only limitation is the bounds of your imagination. You can become a long-standing character that can grow in skills and power. You can be a force for good or you can chose to become a monster. No matter what, you will have fun and shared adventures with a trusted circle of friends.

One thought on “Stranger Things Part 2: The Resurgence of D&D”